I chatted with elite runner, Stephen Lett, about some top marathon tips.

Stephen, a physiotherapist and Pilates instructor, who works at Peak Pilates & Physiotherapy on Auckland’s North Shore, has sweetly given some cool training tips for those doing the Auckland & New York Marathon events.

1. Don’t go out too fast at the start “is the Number 1 Golden Rule”. If you’ve “stuffed yourself” in the beginning half then you are “going to die” in the latter half. Control yourself!

2. Keep hydrated – “because obviously you’ve got to run a long way!” Auckland can be hot too at this time of year, he says (while, NY will be cold, so make sure you’re warm enough). Drink often and properly at water stations – stop to do this perhaps… “rather than dumping Powerade over yourself and getting all sticky!”

3. Use fuel you’ve tried out prior to race day.

4. Get to the race early and in time to use a loo. “Don’t get caught with your pants down so to speak!” Stephen jokes. It’s all about preparation and you want to have gone to the toilet and be ready and relaxed at the start. Follow the 6-Ps: Prior preparation prevents piss poor performance, he quips.

5. His last words of wisdom: “Breathe through your diaphragm and enjoy the race!”

Auckland Detective Senior Sergeant Dave Glossop and Alison Blyth (pictured) are among a group of cyclists who rode from Bluff to Cape Reinga to raise awareness over mental health issues in NZ. 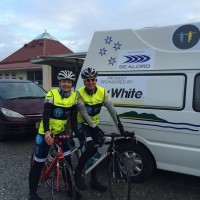 The journey was to highlight that 1.5 Kiwis commit suicide every day. That’s 529 lives lost in the year to June this year, according to data from the Chief Coroner.
Dave says police deal with the fallout from depression and suicide every day. He has personally witnessed too much depression and suicide in his job and this spurred him to take part in this event.
“My career has given me a heightened awareness of depression and suicide. I have witnessed the devastation of friends and relations left behind. I am particularly conscious of the suicide rate involving young people. I have wished so often I could have spoken to some of these kids before they made the choice they have. ..
“I understand the pain and the feeling that they would do anything to escape from the pain, but I wish I could explain that the pain of today will pass…”

He likens cycling to an analogy for life.
“For every up-hill there will be a down-hill. When facing a headwind it will be at your back before long. It’s easier to maintain balance if your moving forward and above all, just keep turning the peddles, keep going in the right direction and you will get to your destination,” he says.

Dave says suicide affects all ages and walks of life. He wants to help take some responsibility to protect our young. This is why he helped raise money for the mental health foundation Mindfulness in Schools. This programme gives people some tools to handle emotions from an early age, he says.

He says when Alison Blyth, who organised the first Ride out of the Blue, contacted him about the ride, “I jumped at the opportunity”. He was lucky enough to get support from his wife Nicky who has been “left carrying the can back home” and he’s thankful for work support too – and giving him leave from work.

Now, he’s just hoping he’s done enough cycle training to keep up with his crew. The group is staying at quite a few marae as they make their way up the country. On Saturday they had finished the first leg and the group stayed at the Te Whanau o Hokonui Marae in Gore. “The support is awesome,” says Dave.

Nourish Your Mind, Body & Soul with this Book

This book is from three holistic-living gals!

This is packed full of gorgeous smoothie & juice recipes, nutritious bliss balls and sweet treats made from great ingredients (sprinkled with rose petals even). There are yoga poses and the book is full of wisdom and tips from three female minds who want to help restore you. You’ll even read about some of Frost’s struggles and why she found meditation and how to do several meditations she uses in real life that she promises can still the mind. There’s even guidance on how to follow the breathe.

You’ll love Rose’s delicious food that nourishes, Robinson’s exercises to strengthen and lengthen your body and Frost’s beauty recipes to soothe the skin too or bring back shine to your locks.

If you feel stressed or want some inspiration then this beautiful book has more than a spoonful of fun, tips, ideas and things to, well, nourish…

This book is published by Kyle Books and distributed in NZ by New Holland. Cost: $49.99

Here are a couple of recipes from the book

Piha Beach is only 40km from Auckland city and it’s one of the best escapes – for the stunning wild and wonderful surf and that beautiful black sand that sticks to your toes. But there’s a walk close by that’s absolutely magic too for a family stroll.
If you haven’t been before, you should check out Kitekite Falls walk in the Waitakere Ranges. 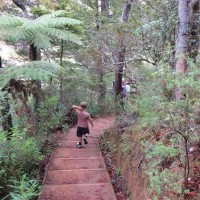 The walk kicks off at the end of Glen Esk Rd and the walk is well signposted; you can’t get lost. A colossal kauri tree stump greets you around here and my kids love to hide in it and pretend it’s a play house.

You must use special spray bottle provided here to blast your shoes to stop a lethal pathogen that is attacking our beautiful kauri trees.

On the walk you encounter a stream, bridges, beautifully-made steps including some that even spiral, and the lush bush here is an absolute escape. Feel the stress from your shoulders evaporate… The air here is just so fresh and energising. But the star of this show is the falls. You’ll stop in your tracks and “wow” will escape from your lips. You glimpse this multi-drop waterfall, that’s 40m high, first through the bush. Then minutes later the falls are near your toes and you rock-hop past it. You can swim here if you’re brave and don’t mind an ice-cold dip.

The walk takes 60-minutes all up if you take it leisurely – or shorter if your strides are strong and you’re not waiting for little ones to catch up.

By the way a doctor named this place. He felt the area reminded him of Scotland. Glen means valley (Gaelic) & Esk means water (Celtic).

ps. A great website on Piha is www.piha.co.nz which gives great ideas on things to do and info about the place.