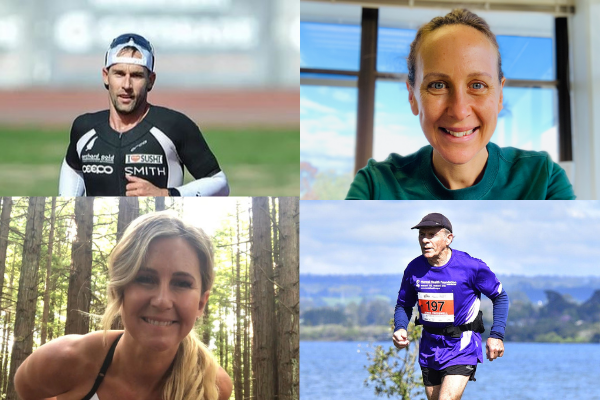 Carb-loading or no carbs? Gels, or no gels? Thoughts around race fuelling change constantly.

But the fact remains: Fuelling well helps you run well.

Fuelling right for optimum performance is something every runner cares about – whether you are at the back of the pack, or in the lead.

I’ve got some insight and tips below from an elite runner, nutritionist, seasoned runner and I also share some tips too as a coach and multi-marathoner. Some of these tips and anecdotes blew my mind and others had me laughing out loud!

Ultimately, fuelling comes down to an individual approach. So what works for one person, might not be the ideal solution for another, So it’s important to have tried and tested a few different ideas before you race – so you can run with confidence on race day knowing what to do. Here are the thoughts on nutrition from a few different peeps. Which one do you mostly connect with?

Simon Cochrane. Based in Hamilton, Simon is an elite endurance athlete who is an official pacer for the 3-hour group racing this year’s event. He is using this year’s event to pace as a training run in the lead up to an ultra-marathon in Wellington in July. He reckons there might only be about five people racing at this hot pace and so he hopes to help them all through. Simon is a top NZ athlete. He came 3rd in the Tarawera 100km Ultra in February. He has had 5 international podium placings over the Ironman distance in his careers and has raced the World Champs in Hawaii. At the Rotorua Marathon event previously, he has placed 2nd in a half marathon (1hr 13 mins) and won the 10km event (34 mins). He is a coach too through his business, Athletic Peak Coaching. Here are his nutrition tips:

“The usual breakfast for me is eggs, toast, and a couple of coffees. That every day – whether it’s training or race day.

“There’s no need to change it up race morning, as your body knows it’s normal routine best. You can maybe just eat a little bit earlier than normal to make sure everything is digested.

“Same with during the race. Have the same nutrition plan as every long key session.

“So mainly aim to keep everything the same – no need to carb-load or eat more as you will have tapered off the run volume and be storing more energy anyway,” says Simon.

I asked Simon about his thoughts around gels?

“I have Tailwind drink, and some real food (bars/bananas) if longer than 3hrs or so,” he says.

James Crosswell, age 71, plumber from Opotiki who is part of the Rotorua Marathon Survivors’ Club (this club includes runners who have done more than 15 Rotorua Marathon events to be an official member). He will run his 44th Rotorua Marathon this year (among almost 100 marathons in total). His fastest marathon is 2hr 52 mins at Rotorua previously. Last year he ran this event in 5hr 20 mins (he now walks and runs so he doesn’t put too much pressure on his heart, he says). Here are his nutrition tips:

“Before a marathon I usually have two pieces of (brown bread) toast with honey on and a cup of tea. I’ll have breakfast at 6.45am on race day.

“Then I just have water at the water stops usually.

“However I’m trialling a vitamin C energy tablet with water now while doing this year’s marathon. I tried it on a run recently and it was quite good.

“In the past I used to put corn syrup in used mini toothpaste tubes and have that while out on the marathon course. It was like a petrol boost,” he says, chuckling.

Mikki Williden, PhD, registered nutritionist and seasoned runner. Mikki is the 2005 Rotorua champion. She has an impressive personal best marathon time of 2hr 55 mins at Auckland where she nabbed a 4th placing in 2010. Check out a Mikkipedia podcast where she interviewed Kathrine Switzer. Here are her nutrition tips:

“With regards to carbohydrate ‘loading’ per se, this has moved on somewhat. There isn’t too much you need to change with regards to carbohydrate load of the diet – in effect, by tapering, you will be carbo loading and restocking your glycogen stores. That’s a really good thing! However, if you follow a pretty low carbohydrate approach, then adding in another 100-150g in the 3 days leading up can just ensure this process is on point. Think: a couple of pieces of fruit, 200g kumara or potato, 1 cup cooked white rice.

“Importantly, you want to be hydrated – so ensure you are drinking adequate amounts of water with electrolyte (such as Nuun tablet or LMNT electrolytes) – ideally not a lot of full sugared electrolyte drink as this isn’t really necessary – but you want to ensure you drink across the day and not backloading or front loading it – that you are just having it regularly. Going in to an event dehydrated can definitely impact negatively on performance outcomes. Becoming a little dehydrated throughout though, is no big deal and may in fact improve race outcomes.

“With protein load and fat load, no need to change things here, however some people feel anxious in lead up to race and therefore their stomach can play up. Dropping fat down a little bit can help. In addition, dropping out vegetables in the 2-3 days prior can also help with the overall gut-related issues that some experience – as the additional fibre at this time isn’t necessary and may interfere with your digestion and that in itself can be nerve wracking. We call this a low residue approach. For example, your meals have a few vegetables, but half what you normally would.

“Don’t make meals too big, and you might be better with a smaller dinner earlier in the day, and then a snack prior to bed in the lead up to the race (i.e. night before) so you don’t feel too loaded down with food. IE this might be a dinner at 5pm and a snack at 8pm (snack could even be just some protein powder mixed into coconut yoghurt with a few berries, or it could be banana and peanut butter or something like that.

“Dinner meals the night before are really individual. What has worked well in the past? Psychologically, it can be good to keep it familiar. Some favourites might be:

“Breakfast the morning of, again, very individual. Don’t need a ton of food here, enough to restock liver glycogen which would have been depleted overnight, but that’s about it. Some people have nothing except coffee and cream, others have full on breakfast. Most are in the middle. Prior to my 2005 win of Rotorua I had 5 white bread buns with jam, a spirulina drink and a banana. Probably wouldn’t do that now, but looking back, it obviously didn’t do any damage on the day! Some ideas might be:

“These are all some options – something to help keep you from being hungry, but not leave you so full. This might be 2h or so before the start of the race.

“Most importantly, don’t try something new on race morning! I made this fatal mistake in 2010 Christchurch marathon, leading to a DNF at 40k because my digestive tract had other ideas. That confirmed for me that dried apricots were not a goer for me pre-race. A mistake that, as a registered nutritionist, I probably shouldn’t have made, but we all live and learn! Good luck!”

Rachel Grunwell, Rotorua Marathon ambassador and 25 x marathoner, who has conquered 4 x Rotorua Marathons in this tally including guiding disabled athletes through three of these races. Rachel is also a run coach and author of the book Balance, which includes science-backed tips on how to be healthier and happier. The book includes four nutritionists too.

Practicing your breakfast and fuelling for race day is a must. If you don’t, you are asking for trouble! I love porridge with cream, blueberries and maple syrup before I run a marathon and have that two hours before I run. I also like a small coffee. While on the run, electrolytes are awesome and I take fuel on board only if I run a long run, or a half marathon or marathon. Under 10km, I’ll run without eating and will just have water mid-run. These days I don’t like the gels and prefer real food to fuel me. Dates or banana is great, but I’ll take on board something like chomps in a marathon. I like the latter because you can break off a bite sized piece of the chomp bar fuel when you need it and I like the taste of it. I guide disabled athletes through marathons from time-to-time and fuelling is something I advise the athletes on while on-the-run. It can make or break the experience. One athlete was feeling tired and took on too much sugary drinks about 34km through a marathon. It ended up in him feeling light headed and puking (I won’t name and shame here but we still laugh about this learning experience together. He learnt that lesson and has thankfully never repeated it!) You learn your lessons hard on a marathon and my hardest lesson with fuelling was not taking on board enough fuel early on in an event and then hitting the wall about 30-something kilometres and my running came to a crawl (I also ran too fast in that same race by the way and so I learnt two hard lessons from that event). What saved me that day and got me to the finish line? A mate meeting me to help me get through that run and him insisting I have a flat coke drink 5km near the end. That caffeine hit had me then fired up and running the fastest average pace in that entire race. Caffeine can uplift your performance and I definitely needed it that day!

This blog was kindly sponsored by the Rotorua Marathon